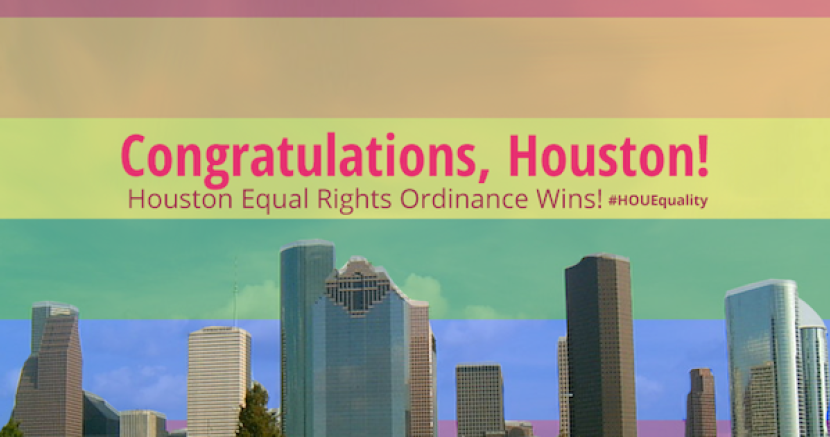 One year ago today, Houston City Council successfully passed the Houston Equal Rights Ordinance, or HERO, after hearing hours of moving testimony from hundreds of supporters.

Among its protections, HERO bans discrimination based on sexual orientation and gender identity in employment, housing, and public places, protecting thousands of LGBTQ Houstonians who could be fired, denied housing, or turned away simply based on who they are and whom they love. Though opponents of equality have fought tooth and nail over the last year to repeal this historic measure, their efforts to defeat HERO have repeatedly failed.

While Democrats in the Texas Legislature filed statewide anti-discrimination legislation, GOP lawmakers introduced numerous bills that would bar cities from adopting or enforcing local non-discrimination ordinances and render these LGBT protections toothless under the guise of “religious freedom.” LGBT advocates and their champions in the legislature prevented these backwards bills from gaining traction.

Polls show that this GOP religious-right effort to roll back progress made on LGBT discrimination protections at the local level run afoul of the beliefs of a strong majority of Texans. A recent poll conducted by G Squared Public Strategies on behalf of Texas Wins found that 63% of Texan voters would support a law protecting LGBT individuals from discrimination, with a majority of Republicans supporting efforts to protect LGBT individuals from employment discrimination. And while they value religious freedom, 79% of voters believe that religious freedom does not give individuals a license to hurt others.

Click here to join the Texas Wins campaign to end discrimination against gay and transgender Texans.