The GOP Votes for Suffering 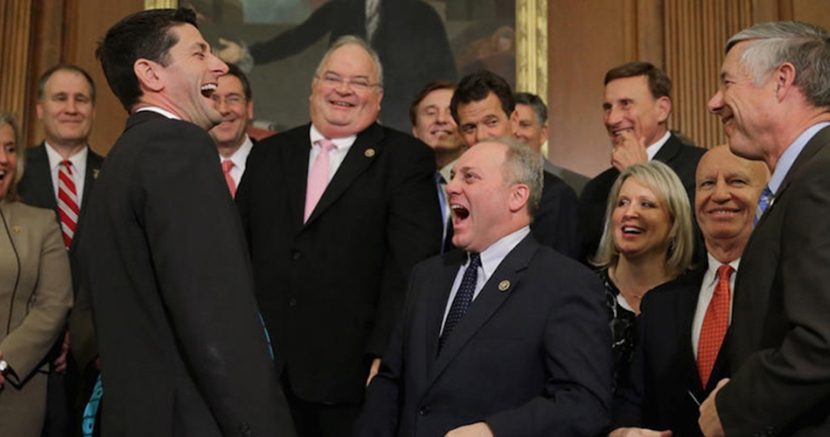 Glenn W. Smith
Congressional Republicans and their co-conspirators around the country are slobbering all over themselves at the prospect of repealing Obamacare.

It’s the same barbarous mentality that led Texas leaders to refuse billions in federal dollars that would have helped millions of Texans get health care under Medicaid. In the case of Obamacare, the Right remains annoyed even though most who are benefitting from the law are buying insurance with their own hard-earned dollars. They argue that it’s a giveaway; and they argue it’s costing Americans too much. Which one is it? They don’t care.

Before Obamacare, insurance companies screened out those with medical conditions they didn’t want to be burdened with covering. The new law changed all that. These folks must now be covered. There is also no lifetime cap on claims. In the old days once you reached that accountant’s magic marker it was pay up or else (stay ill, expire, go broke, etc.).

There are 52 million Americans suffering from pre-existing medical conditions, according to the Kaiser Family Foundation. “We estimate that 27% of adult Americans under the age of 65 have health conditions that would likely leave them uninsurable if they applied for individual market coverage under pre-ACA (Affordable Care Act) practices.”

There are 4.5 million Texans in that category. Every Texan will know or be related to some of them. They will be our neighbors, close friends, parents, grandparents, children. Some of them may lose their insurance immediately after a vote to repeal ACA.

An insurance company that fails to cover a pre-existing medical condition faces a fine of only $100 per day (there are no criminal penalties), and that can be challenged and litigated. GOP leaders say they will delay the actual demise of ACA for two years, giving them time to think up an alternative. In reality, they won’t replace it. They are lying about that.

Insurers won’t wait two years to begin jerking policies from people with medical conditions they don’t want to cover. They know they can delay any penalty or finding of wrongdoing much longer than two years. After that, if ACA goes away, there might not even be a federal mechanism to collect their fines.

Paul Ryan, who hates ACA, Medicaid, Medicare and Social Security, is a cult follower of sociopath writer Ayn Rand and her oven stuffed with half-baked and poisonous political ideas. Among those ideas is the belief that people not engaged in heroic productivity (she uses the word “parasites”) should just, well, perish. For instance, for the good of the heroic, the heroic should take away the health insurance of those they consider unproductive.

The terrifying truth is that Ryan, at least, and many other Republicans in Congress, know that Americans will suffer and die unnecessarily when they lose their health care. Yes, they know it. They are voting for it.

It is easy in contemporary society to set aside the consequences of our political actions. Many are decided in the abstract as if real human beings weren’t involved at all. This is certainly true of the ideologue. Ideological achievements are their own rewards, and only non-believers in the ideology will be punished in any case.

That should sound very familiar to those of a certain age. If you grew up during the Cold War you might recall that it is exactly what we were taught was the terrible trait of our enemies.

If Obamacare is repealed, look carefully at those around you. Some will disappear. Elderly parents will move home with their children. Homes in your neighborhood will be repossessed after your neighbors mortgage them to pay for health care when they can’t afford the loans.

This is what some Americans want to do to other Americans. It’s almost as hard to live with that fact as it will be to survive post-Obamacare America.