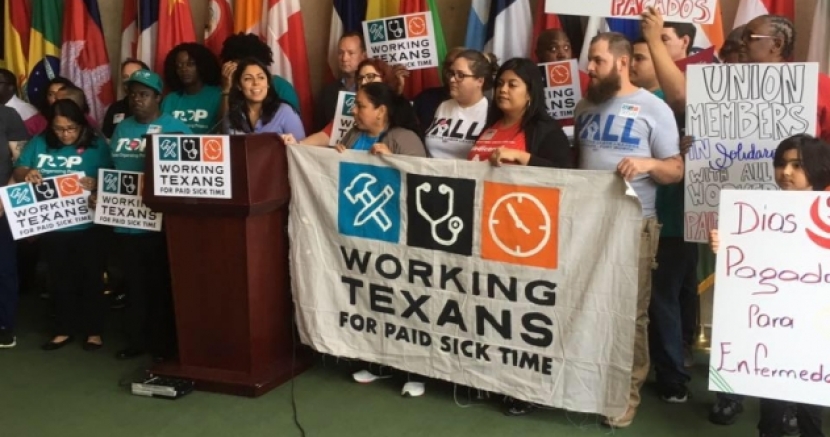 All Texans deserve the security and dignity that comes with access to earned paid sick days. Austin was the first Texas city to ensure this basic standard — Dallas and San Antonio are next.

No hardworking Texan should have to choose between taking care of themselves or a sick family member or keeping their job and paying their bills. That’s why a coalition of Texas-based community and labor organizations — Working Texans for Paid Sick Time — have launched petition drives to place earned paid sick time on the ballot this November in Dallas and San Antonio.

As it stands today, according to the Institute for Women’s Policy Research, about 40% of of workers in Texas — and the majority of low-wage workers — can’t earn even a single paid sick day.

The goal of Working Texans for Paid Sick Time is as simple as it is profound: “in addition to providing a much-needed benefit to millions of working families, this campaign will harness the power of marginalized would-be voters to create a better Texas—one where working people have a voice in the policy decisions that affect their lives.”

“We’re taking this to the voters because this campaign is going to be fought and won by the people of San Antonio.”

Michelle Tremillo, executive director of Texas Organizing Project, explained that San Antonio is ready for a paid sick days ordinance: “Families and community members are ready for a policy that will have a direct impact on their lives and will work to see a paid sick time policy passed in San Antonio. We believe that when we take the time to talk to the people who live and work in San Antonio and listen to them, that they will engage in the electoral process and create a better San Antonio.”

In order to get on the ballot in November, the coalition will need to get more than 75,000 registered voters in San Antonio to sign an initiative petition on paid sick time.

According to Yvonne Gutierrez, executive director of Planned Parenthood Texas Votes, access to paid sick days is also a reproductive justice issue: “Not being able to take time off of work is a significant barrier for many women, particularly low-income women and women of color, when trying to access family planning and reproductive health care. All women should be able to exercise their reproductive rights.”

“Dallas families have struggled for far too long to make ends meet as our city continues to grow and leaves families further behind.”

“We have filed an intent to circulate a petition that will bring earned paid sick time to the doors of the low income families that build and serve Dallas — and they will place this initiative on the ballot,” explained Diana Ramirez, deputy political director of Workers Defense Action Fund.

To get the ordinance on the ballot in Dallas in November, the coalition will need to gather nearly 65,000 signatures on its Dallas paid sick time petition.