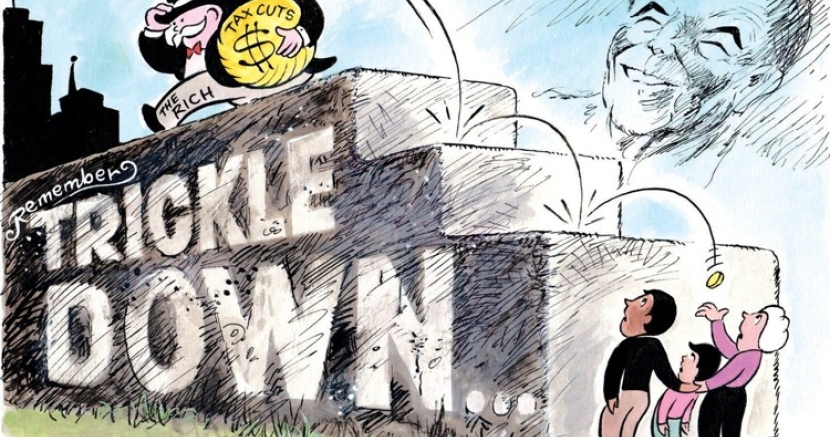 Caddies Versus the Thimbleriggers: Examining the GOP Tax Plan

By now, 37 years after Ronald Reagan was elected (the same year Caddyshack was released, by the by) and began selling America on so-called trickle-down economics, you’d think all Americans would have wised up.

To assess the congressional Republican tax plan, let’s begin with the movie, Caddyshack. At one point, Carl Spackler, played by Bill Murray, tells a story about the time he was the Dalai Lama’s golf caddy.

“And I say,” says Spackler, “‘Hey, Lama, hey, how about a little something, you know, for the effort, you know?’ And he says, ‘Oh, uh, there won’t be any money, but when you die, on your deathbed, you will receive total consciousness.’ So, I got that goin’ for me. Which is nice.”

That’s how a deadpan-dry Bill Murray in just a few words sums up the economic policies of the American Right. The bit is made funnier by using the egalitarian Dalai Lama to make the point: there’s nothing for the poor and middle class caddies, though believers will get a snake-oiled promise of a place in heaven or at least a sign they are waiting in the right line.

Meanwhile, the wealthy in their carts wheel their windfall profits across the golf clubs of their dreams, which, it turns out, were not confiscated by the United Nations international conspirators of Agenda 21, as Sen. Ted Cruz once said would happen.

Let’s look at the scorecard. An NBC News analysis of the tax plan passed by the U.S. House said, “By 2027, the bottom 40 percent of earners would see almost no average change in their tax bill at all versus current law. Nearly half the bill’s benefits would go to the top 1 percent.”

In case you wondered, Trump and his family would save $1 billion under the plan.

If that possibility makes you sick, you should hope you are not one of the 13 million Americans who would lose their health care under the Senate tax proposal. That’s the Congressional Budget Office estimate of the human cost of eliminating the individual health insurance mandate, a provision senators attached to the tax bill.

There’s more. Or, rather, there’s less. The GOP plan would automatically trigger a $25 billion cut to Medicare, according to the CBO. It would eliminate state and local tax deductions and student loan interest deductions.

But, you ask, won’t the big corporations and the wealthy folks invest their tax windfall in similar benefits for all of us?

Well, just recently – on videotape –  John Bussey, associate editor of the Wall Street Journal, asked a room full of corporate CEOs if they would increase their investments if the tax bill went through. Trump’s economic policy advisor Gary Cohn was clearly embarrassed when only five or six raised their hands. “Why aren’t the other hands up?” Cohn asked nervously. The room was silent. Awkward.

Polls show that most Americans are skeptical of the GOP tax plan, which is nice, Bill Murray might say.  But it remains a mystery that any American could still believe the Republican claim that if we’ll just give most of the wealth to the very few at the top all of us will benefit.

It’s as if Republican officials had all become thimbleriggers. What’s a thimblerigger, you ask? It’s another name for the operator of a shell game, the con game in which a credulous victim is asked which of three cups the pea is under. Before the mark chooses, of course, the pea has been palmed. It’s no longer under any of the cups.

By now, 37 years after Ronald Reagan was elected (the same year Caddyshack was released, by the by) and began selling America on so-called trickle-down economics, you’d think all Americans would have wised up.

The thimbleriggers of the GOP don’t even bother with three cups anymore. There’s just one, and no matter how hard the hapless victims stare and swear and bet that they know, there’s nothing under the cup at all.