Beyond Bathrooms: Other Anti-LGBTQ Bills to Watch Out for This Session 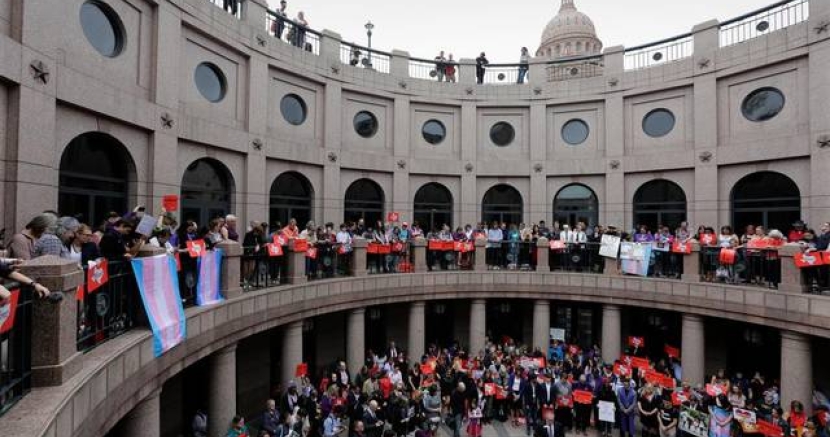 Unless you’ve been living under a rock, you’ve heard about Texas Lieutenant Governor Dan Patrick’s anti-transgender, so-called “bathroom bill.” Even though the backlash against Senate Bill 6 — a bill that would do nothing but target transgender Texans for discrimination — has been fierce and widespread, Republicans in the state Legislature aren’t stopping there. They’ve filed more than 20 other anti-LGBTQ bills that threaten equality.

HB 1362 by Rep. Matt Shaheen (R-Plano: 512-463-0594) would prohibit public schools from implementing policies that would allow transgender youth from using restroom and changing facilities consistent with their gender identity.

SB 92 by Sen. Bob Hall (R-Edgewood: 512-463-0102), HB 2899 by Rep Ron Simmons (R-Carrollton: 512-463-0478), and HB 4097 by Rep Briscoe Cain (R-Deer Park: 512-463-0733) would prevent Texas cities and counties from enacting non-discrimination protections for LGBTQ people and further trample local control by repealing protections already on the books. In much of Texas today, it is totally legal for a gay, lesbian, transgender, or queer person to be fired from a job, evicted from their apartment, or denied service because of who they are. Local ordinances in cities like San Antonio, Austin, Dallas, and Fort Worth provide protection against discrimination based on sexual orientation and gender identity or expression.

SB 89 by Sen Bob Hall (R-Edgewood: 512-463-0102) would allow the state of Texas to refuse to enforce any federal law deemed to violate the Texas Constitution.

SB 651 by Sen. Charles Perry (R-Lubbock: 512-463-0128) would expand the definition of religious expression, and limit the enforcement of rules, regulations, and policies of state agencies that regulate business, occupation, or professional licensing. This broad “license to discriminate” bill would allow private individuals employed in more than 65 licensed occupations to deny services to people based on their “sincerely held religious belief.”

HB 1813 by Rep. Dan Flynn (R-Canton: 512-463-0880) and SB 522 by State Sen. Birdwell (R-Granbury: 512-463-0122) would allow county clerks to pass off issuing marriage licenses to other certifying officials if issuing that marriage license conflicts with the clerk’s “sincerely held religious beliefs.”

HB 1923 by Rep. Matt Krause (R- Fort Worth: 512-463-0562) and SB 893 by Sen. Bryan Hughes (R-Mineola: 512-463-0271) would allow individuals and businesses to decline to provide services to any person if providing the service conflicts with the individual’s or business’s “sincerely held religious beliefs.”

HB 2795 by Rep Mike Lang (R- Granbury: 512-463-0656) would allow county clerks and deputy county clerks to decline a marriage license if doing so conflicts with “their sincerely held religious beliefs.”

HB 2876 by Rep. Scott Sanford (R-McKinney: 512-463-0356) would allow wedding industry professionals and employees to refuse to serve clients if it conflicts with their “sincerely held religious beliefs.”

HB 2878 by Rep Scott Sanford (R-McKinney: 512-463-0356) would allow health care professionals to refuse to treat patients if it conflicts with their “sincerely held religious beliefs.”

HB 3571 by Rep. Tom Oliverson (R-Cypress: 512-463-0661) would provide a religious exemption from any civil action claiming discrimination, or violation of a municipal ordinance for discrimination, based on any characteristic other than race, color, religion, sex, national origin, age, or disability.

HB 3859 by Rep. James Frank (R-Wichita Falls: 512-463-0534) would allow providers of child welfare services the right to refuse service to clients if doing so conflicts with sincerely held religious beliefs.