Betsy Get Your Gun 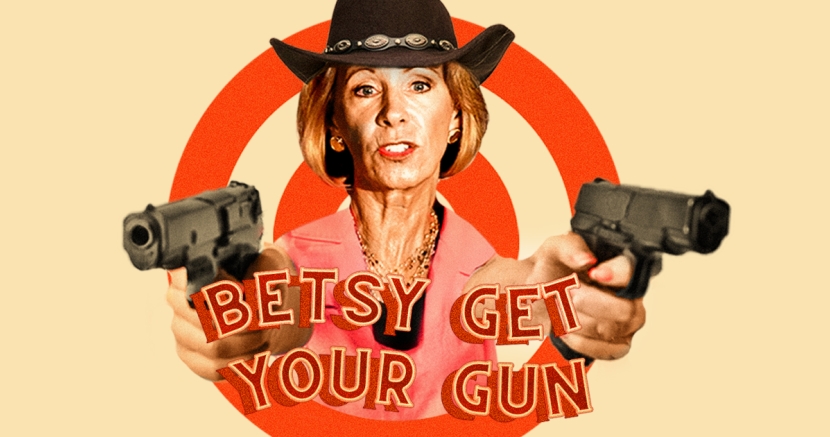 Texas’ public schools are critically underfunded, so much so that last year the courts noted, “Texas’s more than 5 million school children deserve better.”

And yet, when federal dollars were available to invest in our students, Texas officials had other ideas. Guns!

As the New York Times reported, inquiries from Texas leaders have prompted Education Secretary Betsy Devos to examine whether federal education grants can be used to purchase firearms.

The Student Support and Academic Enrichment grants were created to support the nation’s poorest schools and ask for districts to use the money toward providing a well-rounded education, improving school conditions, and improving digital literacy.

Instead of investing in our most at-risk students, like the program was intended to do, Texas officials want to buy guns. Students are being crammed into overcrowded classes, teachers are buying their own school supplies, and too many students aren’t receiving a 21st-century education. But by all means, let’s make sure Mrs. Smith has a pistol. Such a move would reverse decades of protocol that prevents federal dollars from being used to turn teachers into police forces.

With millions of National Rifle Association dollars flowing into the Texas Republican party, it shouldn’t be all that surprising that their go-to solution is “buy more guns.” The only people who stand to benefit from such a choice are the NRA’s biggest backers: gun manufacturers.

“It’s one more example of the corruption, greed and misplaced values of this administration,” Lily Eskelsen Garcia, President of the National Education Association told the Times. “If we use the funds for what they were intended to be used for, we might start tackling some of the issues that lead to gun violence.”

When will Texas Republicans start representing our students rather than their NRA donors?