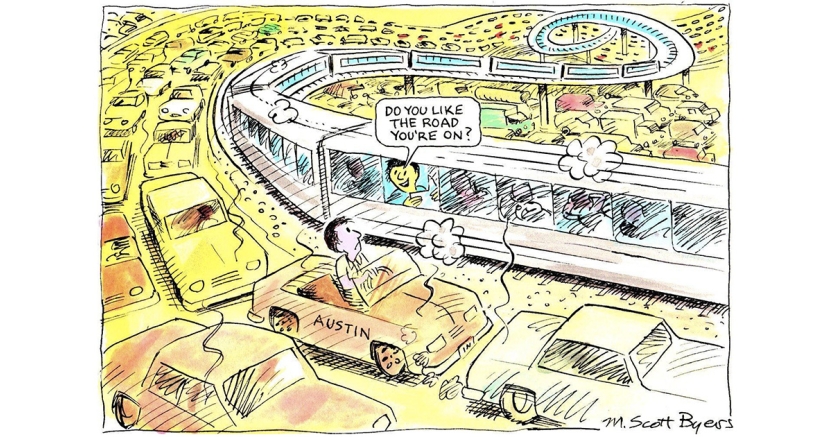 Illustration by M. Scott Byers
We can’t road-build our way out of our traffic woes. End of story.

I’ll say this for our insane car culture: Any space aliens who might have passed our way no doubt figured that Earthlings have such low transportation IQs we aren’t worth a galactic howdy.

Austin residents of today and tomorrow should welcome the planning under way in Project Connect by the City of Austin and Capital Metro because it represents higher-level thinking than that of the concrete-brained road builders who killed earlier rail plans and other alternatives.

We can’t road-build our way out of our traffic woes. End of story. There’s a thing called induced demand: Traffic expands to fill up the space its given. Add new lanes and before you know it the congestion is right back where it started.

A case in point: the Gulf Freeway, Interstate 45 from downtown Houston to Galveston. After 72 years, this freeway is still under construction. That’s a human lifetime.

From birth until they speed along the highway to Heaven, folks will be stuck in traffic on the Gulf Freeway. It’s not a freeway. It’s Purgatory.

City and Cap Metro officials are working toward a November election on a multibillion-dollar, multi-component transportation plan that will include high capacity transit options with multiple rail lines, including downtown subway tunnels.

The post-World War II development of cities, especially those like Austin, depended in large part on investment in automobile infrastructure. But, that was a policy choice, not an unavoidable necessity.

The oil and gas industry, the concrete and asphalt industries, the tire companies and, of course, automakers, spent billions over the years trashing alternatives like rail and lobbying for public expenditures on highways and boulevards.

James Dean’s hot rod in “Rebel Without a Cause” became a post-war symbol of youth rebellion, but it wasn’t without a cause after all. It helped fuel the car culture craze that took over America in the 1950s and 1960s.

It’s hard to see why those opposed to rail and other alternatives — disproportionately represented in the Republican Party — continue their roads-to-nowhere campaigns. Maybe it’s a continued allegiance to the industries named above. Maybe it’s just tired thinking.

Also, there are some here in Central Texas who are of the mindset that if we don’t build it, they won’t come. Hasn’t the last 30 or 40 years proved them wrong? We didn’t build a modern transportation system and still they came, obeying global, national and local economic forces.

Project Connect will carry a hefty price tag. A new state law allowing tax rate elections as an alternative to bonds is being explored as an efficient, steady source of dedicated transportation revenue.

With increased productivity, lower fuel and car upkeep costs, reductions in pollution-generating traffic congestion, and the improvement in our quality of life, it will be well worth the costs.