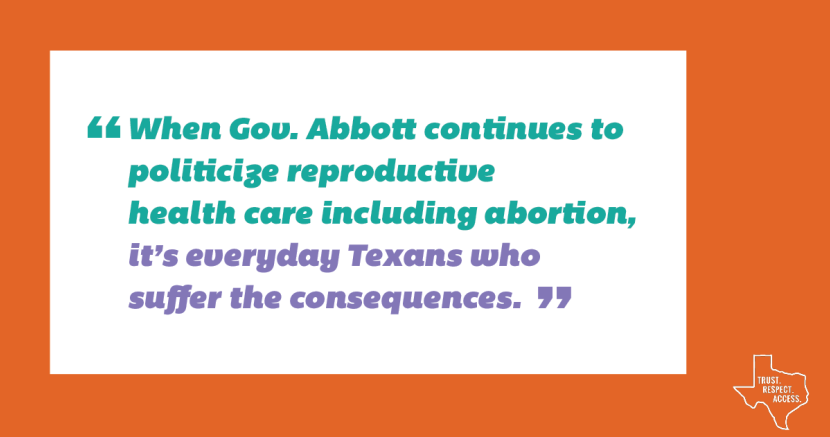 Texas reproductive rights and justice groups are united in the fight against the politicization of women’s access to reproductive health care.

Ahead of Texas lawmakers’ return to the Capitol to take up Governor Greg Abbott’s extreme anti-abortion, special session agenda, a broad coalition of reproductive health, rights, and justice groups from across the state — the Trust. Respect. Access. coalition — denounce his dangerous anti-abortion priorities.

Despite an ongoing women’s health crisis in Texas, Gov. Abbott put forward three reckless and politically motivated anti-abortion measures aimed at restricting women’s access to reproductive health care. Texas has the highest maternal mortality rate in the developed world. Yet instead of working to save women’s lives and improve women’s health outcomes, Governor Abbott and his fellow anti-abortion lawmakers are working to make it harder for women to get the care they need.

Click here to tell your representatives in Texas Legislature to vote against these three dangerous, anti-abortion measures — to stop playing politics with women’s lives.

“We do not want Black women to continue dying. Black women are dying at a rate higher than women in the developed world due to conditions related to maternal mortality. Conditions that are preventable with access to prenatal and postnatal care. Sadly in our beloved Texas the majority of women impacted by the current maternal mortality concerns lose access to Medicaid benefits shortly after delivering, and the death rate correlates to when they lose these benefits. The insistent and deliberate focus on defunding Planned Parenthood is really defunding access to well women care, like prenatal and for some postnatal care. When will we speak the truth and say, ‘Hey, I am afraid I am becoming extinct. That is my real issue.’ The truth is what will help all of us live better lives. Anything else will only support the trend of Black women continuing to die and we, The Afiya Center, find that unacceptable.”

“When Gov. Abbott continues to politicize reproductive health care including abortion, it’s everyday Texans who suffer the consequences. State politicians jeopardize the health of women, men, and teens who will go without vital care when they attack Planned Parenthood. Texas lawmakers should be working to expand access to quality, affordable health care and providers like Planned Parenthood instead of banning partnerships that advance health care in local communities.”

"Existing bans on abortion coverage already pose a serious threat to Texans' health and safety. Now Texas politicians are doubling down on this bad policy by eliminating coverage for even more people. All Texans should be able to get safe and legal abortion care, however they are insured and whatever their income. Anti-abortion lawmakers should be ashamed of this poorly-veiled attempt to push abortion out of reach."

“The reality is that abortion care is one of the safest medical procedures in healthcare. Abortion providers already adhere to reporting requirements, in addition to the strict reporting that is required of abortion providers specifically by the state. These proposed changes to the reporting requirements are a back-end approach to further burden medical providers and stigmatize abortion care.  We ask that the state address the multiple barriers Texans face accessing basic healthcare, instead of trying to blatantly disregard the Supreme Court ruling in Whole Woman’s Health v. Hellerstedt by passing medically unnecessary laws, with the goal of closing clinics and ultimately harming Texans.“