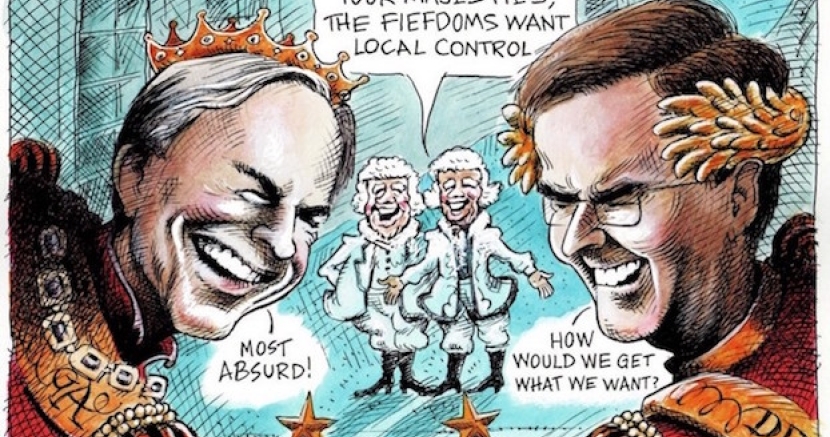 What, local voters, made you think you could have a say in how good your schools are? Or whether or not your public hospitals remain open?

On a variety of fronts, Gov. Greg Abbott and the Texas Legislature are moving to strip local voters of control over their communities. It’s a dangerous, anti-democratic gambit that ought to have conservative, moderate and liberal voters up in arms.

Of course, Abbott, Lt. Gov. Dan Patrick and other legislators don’t put it this way. According to their statements, they are only protecting the rights of Texans – most of whom are the very Texans whose voting rights they are trampling. In their minds, “protecting” is just a word for “do what we tell you to do.”

Back in 2015, the Legislature decided that Denton voters needed remedial disenfranchisement. Those North Texas voters, who were thinking maybe they didn’t want their tap water catching fire or their foundations cracking from earthquakes, passed a little referendum banning fracking in the city.

The audacity of that expression of community interest at the ballot box made for outrage in the Texas Legislature, which quickly overturned the ban.

Now the Legislature has its eyes on other fish — or a whole other kettle of fish — and it smells just like you fear it would.

For instance, in the wake of the state’s refusal to accept billions in federal dollars to extend health care to millions, local hospitals are finding their budgets stretched by treating those unable to pay. Hospital districts might need to raise taxes to cover those costs. So, the Legislature is now considering a so-called “appraisal cap” that would limit — if not stop — such property tax increases.

What, local voters, made you think you could have a say in how good your schools are? Or whether or not your public hospitals remain open?

Austin had the nerve to ask that ride-hailing service Uber have the good sense to screen its drivers before someone got hurt. Uber likes local decision-making even less than Texas legislators do. Uber left Austin after voters rejected their uber-libertarian, anti-consumer protection move. Now, Republican legislators — no doubt — are eyeing potential Uber campaign contributions and want to undo Austin voters’ decision.

Some of you may recall that local control was once a key conservative principle. Well, they also once railed against presidential executive orders until their party’s president started papering Washington, D.C., with them. They also mounted a war on “situation ethics” — you know, where one can change moral codes like clothes when the seasons change.

Who are we to argue with the weather?

About now you are wondering how these Republicans, who spent the last eight years saying the federal government couldn’t tell them what to do, now want to tell local governments that they — the state government — can tell the little local fellers what to do.

This is all convenient poppycock for state leaders. You see, most Texas metropolitan areas are trending Democratic. And state government at the moment is — in this writer’s opinion — tragically held hostage by these very same state supremacists.

So, of course the state leaders want to disenfranchise metropolitan area voters. It’s a piece of other voter suppression policies, such as hard-to-comply-with voter ID requirements and the gerrymandering of representative districts.

There is trouble on the horizon for the state supremacists. The trouble lies in their insatiability. Today it’s urban, Democratic areas. They won’t stop there. Texas is a big place just a-begging for their strong, guiding hands.

However, ex-urban and rural Texans are increasingly restive. Many, for instance, really don’t like the state destroying their local schools with cuts in funding and the use of taxpayer funds for private schools.

The state supremacists may wake up soon and find that their unlikability in the polls is the only supreme thing about them.