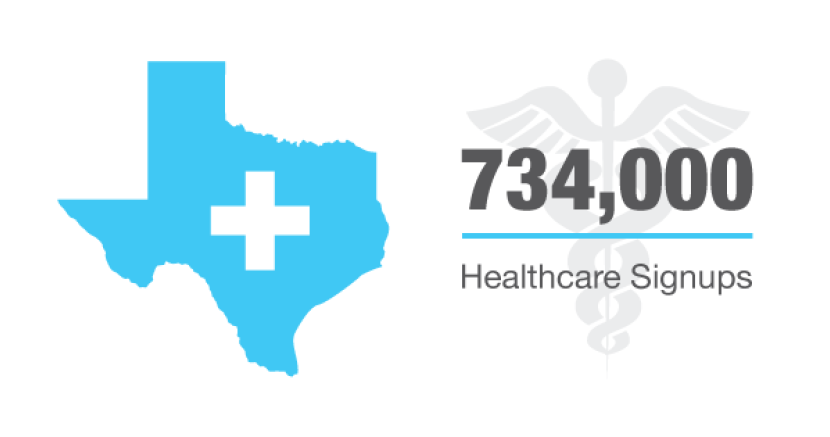 This is a win.

734,000 Texans have enrolled through the federal health care exchange set up by the Affordable Care Act - a whopping 105,000 more than was originally projected!

Among the highlights of those who signed up:

Stacey Pogue of the Center for Public Policy Priorities talked about the historic feat:

Texas has made more progress on affordable health insurance in the last six months than in the last decade,” said Stacey Pogue, Senior Policy Analyst at the Center for Public Policy Priorities, a member of the Texas Well and Healthy coalition. “Nonetheless, when we look at other states that took an ‘all hands on deck approach’ to helping people enroll, we know that Texas could do much more. Texas needs to get serious about making sure families have the insurance they need to stay healthy and financially stable. Too many Texans are still one illness or one accident away from going bankrupt.”

And all of this despite the constant efforts by Greg Abbott, Rick Perry, and Ted Cruz to repeal the Affordable Care Act. Imagine how many more would have health insurance in Texas if we had elected officials that recognized the multitude of benefits -- lower health premiums, saving property tax dollars, more jobs and stronger local economies - that would come from full expansion of Medicaid.
Despite the good news, at least 1 million Texans remain in the coverage gap because of the decision by Rick Perry and Texas Republicans to not expand Medicaid.
If you are in the coverage gap, or would like to get involved in helping to close the gap, sign-up online at www.TexasLeftMeOut.org
Tags
ACA
Greg Abbott
Health Care
Ted Cruz
Rick Perry