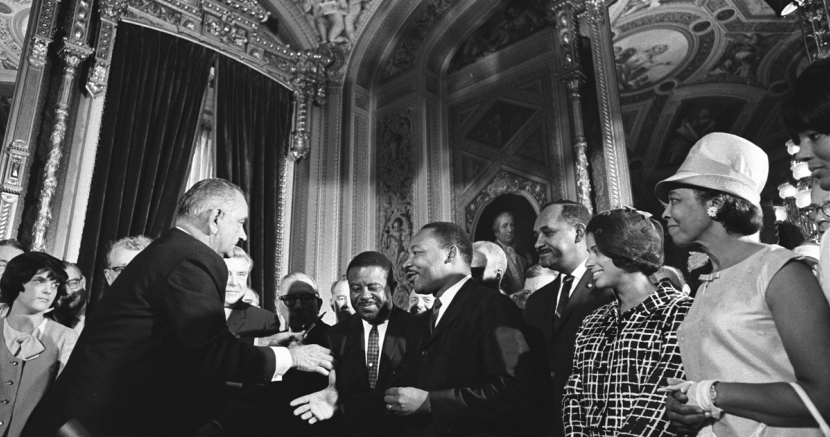 On 50th Anniversary of Voting Rights Act, Not a Mention of It In GOP Debates

You can be forgiven for having a “what just happened?” reaction to Thursday’s Fox News debates. The debates were physically startling, like witnessing a terrible car crash. I must have looked like the kid on the bicycle witnessing a deadly wreck in the AT&T “No Post is Worth a Life” anti-texting while driving ad. http://bizbeatblog.dallasnews.com/2015/07/atts-latest-commercial-slows-down-a-horrific-texting-while-driving-crash.html/

After the dust cleared enough to see, I watched in dismay as multiple presidential candidates more or less promised, “Elect me and I’ll take you to war in the Middle East.” I can’t find a time in U.S. history when so many presidential aspirants used the prospect of war to promote themselves.

Many noted at the conclusion of the later debate that there had been no mention of the climate crisis. In fact, the word “environment” never came up unless I missed it because of one of those deafening, make-my-ears-ring Trumpian moments of triumph.

But even more revealing was the fact that on the 50th anniversary of the historic Voting Rights Act neither the act nor the subject of voting rights came up. Two debates that included 17 Republican candidates and the Voting Rights Act never got a mention. It is a damning omission.

The VRA is no minor piece of legislation. It was a grand achievement in the ongoing struggle to achieve a more perfect democratic union. The VRA outlawed the suppression of minority votes in jurisdictions with a history of a denial of voting rights. Of course, conservatives hated it from the very beginning. It took 48 years, but conservatives finally succeeded in doing the VRA serious damage in 2013 when the U.S. Supreme Court invalidated key sections of the law. Justice John Roberts, in the majority opinion, basically said there was no more bigotry or voter suppression in America.

It was strange argument. If there’s no more voter suppression, why not let the VRA stand? If it’s not needed, fine. But if it remains intact, we have a bulwark against racist efforts to disenfranchise folks.

Let me put it another way. A city wouldn’t repeal its fire code just because there hadn’t been a fire in a while. They analogy is not quite accurate, because in the case of voter suppression the fires never went out. And since the 2013 decision, conservative efforts to disenfranchise millions of voters have only increased.

The day before the anniversary of the VRA, the 5th Circuit Court of Appeals struck down Texas’ oppressive photo voter I.D. law. The Court found that it discriminated against blacks, Hispanics and the poor. It was a huge victory. And I want to pause and congratulate the many Democratic lawmakers who have spent years fighting against undemocratic voter suppression. U.S. Rep. Marc Veasey of Fort Worth brought the suit against the voter I.D. law. But many other Democratic legislators did everything they could to block its implementation in the first place.

The victory wasn’t total. The appeals court refused to confirm a lower court finding that the law intentionally discriminated. Had that been upheld, Texas would have gone back under the provisions of the Voting Rights Act according the Supreme Court’s VRA ruling. That may happen anyway as an expected court order likely will find that lawmakers’ district lines were drawn to intentionally discriminate against minorities. We’ll see.

Meanwhile, let’s note that Oregon just approved an automatic voter registration law. Turn 18 in Oregon, and you are registered to vote. Back in the days of the military draft, the government had no problem automatically registering everyone when they turned 18. The notice arrived very promptly, as I recall. So let’s do the same thing with regard to voter registration. If it’s easy enough to register folks to die and kill in war, it seems only right we’d approach voter registration the same way. Does it need pointing out that a great number of Americans who received that automatic draft notice back in the day were the very ones being disenfranchised at the same time?

Why won’t automatic voter registration happen? Because the history of American democracy is basically a history of the unfinished effort to give every American an equal say in their government. It took decades to extend the franchise to African-Americans (a right imperfectly achieved even today, as noted above). It took even longer to extend the franchise to women. For whatever reason, powers that be believe it legitimate to win elections by excluding those they believe oppose them. They (and by they I mean the Republican Party) are not done with their fight against universal suffrage.

Want to know why the Voting Rights Act didn’t come up during the Republican presidential debates Thursday night? Because there wasn’t a GOP candidate in either debate that believes in universal suffrage. They just don’t want to say so. Best to stay silent.