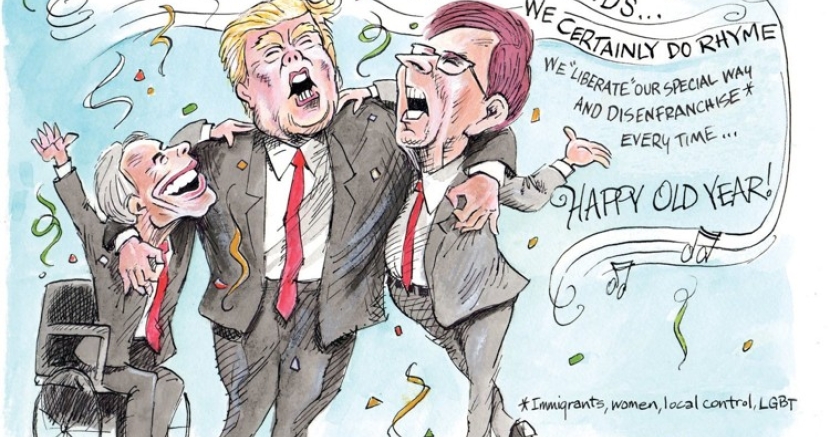 The year is drawing to a close with long-overdue revelations of sexual harassment and abuse of women by men of power and wealth.

The year 2017 began on Oct. 7. The calendars may claim Jan. 1st as the first day of a new year. Here, near the end of this one, we know better.
The year really began the day a video was released in which Donald Trump bragged that he was so famous he could abuse women at will. “When you’re a star, they let you do it. You can do anything…grab ‘em by the…,” Trump said.

As any review of 2017 will note, the year is drawing to a close with shocking — if long-overdue — revelations of sexual harassment and abuse of women by men of power and wealth.

This year, Trump and his allies claimed an authoritarian power and privilege the authors of the U.S. Constitution were at pains to prohibit. To Trump, though, America is just another pretty woman to whom he can do anything he wants.

It turns out that America does care, just like the women speaking out about the abuse they have suffered — and the millions standing with their cause.

The moral universe might be long, as the Rev. Dr. Martin Luther King Jr. said it was, but the arc of justice sometimes hurries along: Forbes magazine reported Trump’s net worth had dropped $600 million over the last year. Many would-be guests avoided his properties because they are “offended by the president’s politics and bombast,” Forbes reported.

Despite Trump’s efforts to shut down an investigation of Russian interference in the U.S. election and contact his campaign staff, transition team and White House staff had with powerful Russians, the investigation seems to get closer to Trump himself every day.

While moving to undermine the Affordable Care Act, jeopardizing the lives and health of millions of Americans, Trump failed to repeal it outright. In fact, despite GOP majorities in the U.S. House and Senate, and a conservative majority on the U.S. Supreme Court, Trump has little to show but his weak-tea tweets for his time in the White House.

Here in Texas, it was the year House Speaker Joe Straus said he was going to disappear. It could leave leadership of the state House to an assortment of extremists whose proposals seem more like hate crimes than forward-looking legislation.

Gov. Greg Abbott and Lt. Gov. Dan Patrick were locked in a political marriage of convenience, each afraid the other will one day cry alienation of affection. Like many a bad marriage, though, they’ve not got much done.

They kept up their attacks on women with new restrictions on reproductive health care. They noted that citizens of most Texas cities were now voting for Democrats, so they moved hard to take local control away from elected officials in those cities.

They failed in their obsessive quest to mandate what bathroom transgender folks can use, claiming they were just trying to protect daughters from predators. In light of all the revelations about real predators, their effort looks even more hateful.

The state and federal governments are falling behind in efforts to rebuild Houston and other coastal areas severely damaged by Hurricane Harvey. It seems neither Texas nor the fed is willing to spend the necessary funds. The fate of Houston and coastal Texas will play a big role in the 2018 elections.

The release of the Trump “grab ‘em” video was the real start to 2017. It may be that the backlash is just beginning and that in 2018 we will begin to reform our contemptible culture that for too long turned a blind eye to these crimes.

We can hope to reform the culture that makes a Moore win even thinkable, and that allows Trump to make his obscene claim and still be elected president.