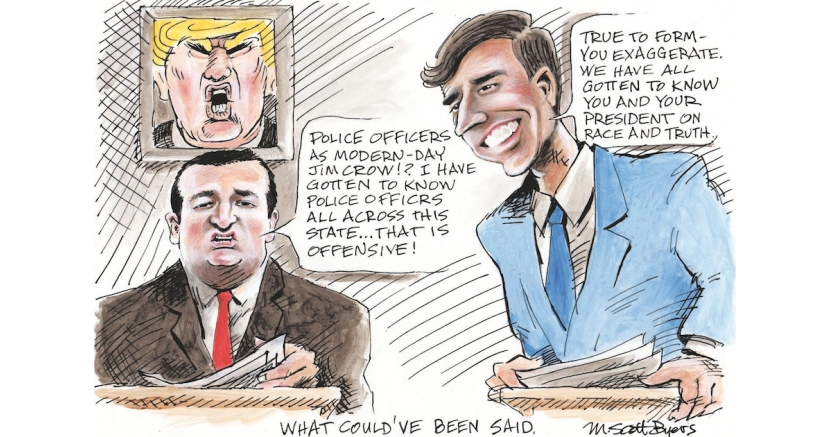 O’Rourke was right to speak out on racism

Illustration by M. Scott Byers/For the Austin American-Statesman
Beto O’Rourke was right to speak up, and we should all welcome an open-hearted, eyes-wide-open, public conversation regarding our racial divides.

What is just as persistent as the river of racism that courses through American history? The denial of racism.

U.S. Supreme Court Chief Justice John Roberts defended his 2013 opinion gutting the 1965 Voting Rights Act by denying that the rights of non-white Americans were still threatened by racism. In effect, Roberts ordered the sand bags removed that had helped protect non-white Americans from the flood.

“This justification for taking the lives of people, and disproportionately people of color on illegal drugs in this country has rightfully been called the new Jim Crow,” O’Rourke said.

At their first debate, Cruz, putting on his best Alex Jones-like indignant face, pounced on O’Rourke’s remarks. “Congressman O’Rourke described law enforcement, described police officers, as modern-day Jim Crow,” Cruz said. “Let me say something: I have gotten to know police officers all across this state. That is offensive.”

Neutral fact-checkers called Cruz out for his exaggerations, as they should have.

We can all agree that a vast majority of white police officers in Texas and America are champions of equal justice. But, we should also agree that the criminal justice system in which they serve produces unacceptable levels of injustice.

In a 2017 study, the United States Sentencing Commission found that black men received 20 percent longer federal prison sentences than white men convicted of the same crimes. That statistic is not an outlier, and it helps expose the systemic racism of our criminal justice system.

It does not mean, and O’Rourke did not say, that all police officers are racist. O’Rourke spoke forcibly to a topic many, especially those who exploit racist elements, want to continue to ignore.

Worn out by the Vietnam War, Watergate and the historic effort it took to achieve passage of the Voting Rights Act and the Civil Rights Act of 1964, Americans turned away from what should have been a continued struggle to extend freedom and opportunity to all.

There’s a parallel to our silence made plain by Hurricane Harvey. We quit tending to our dams and drainage systems, and we paid a price. The same is true of the floodwaters of hatred and bigotry. We have not tended to their dangers, and we’re paying the price for that as well.

Silence is a shackle, chaining us to future none will want. O’Rourke was right to speak up, and we should all welcome an open-hearted, eyes-wide-open, public conversation regarding our racial divides.