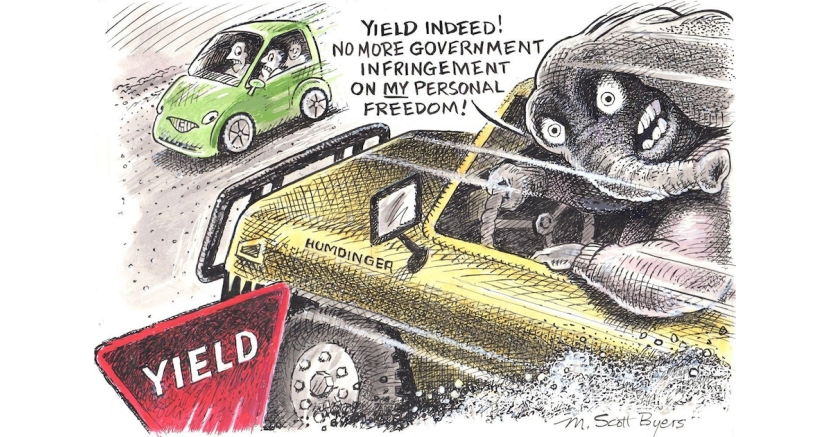 How the war on vaccines diminishes our freedom

One day, the Trump years will be seen as the Peak Era of No More Yielding in Traffic, or Anywhere Else for That Matter. That’s how confused we’ve become about what freedom is and what it takes to be free.

Take the “give-me-liberty” claims of the anti-vaccine crowd, for instance. “I look forward to smashing your bill into the ground in the name of LIBERTY,” state Rep. Jonathan Stickland once wrote on Facebook, taunting a colleague who proposed closing the loopholes used to avoid state vaccination laws.

Couldn’t violators of yield laws at traffic intersections make the same claims for their personal freedom?

Doctors and other folks opposed to epidemics might be tempted to utter “a pox on you” at Stickland and other anti-vaxxers, but there may be no need to wish. Trouble is, the anti-vaxxers’ actions might bring a pox on the rest of us, too.

Doctors and health experts are concerned that we are on the edge of a measles epidemic. Measles had been declared eradicated in 2000. Today, the nation is suffering the worst measles outbreak in a quarter-century. There are 15 reported cases in Texas, more than in all of last year.

A kind of willful ignorance of the needs of freedom can be seen everywhere. We can see it in Americans’ approval of the use of cages to keep asylum seekers at the border. We can see it in the so-called “religious freedom” arguments that claim laws against discrimination are assaults on the First Amendment.

It’s no coincidence that those who’ve turned the First Amendment upside down by claiming it gives them the right to step on the rights of others are generally part of the same movement.

Approve of keeping humans in cages meant for dogs and sooner or later it will be you or someone you love in a cage. Once you’ve blessed the use of cages, it may one day be your enemy who’s in charge of them.

Stand against vaccines that protect us all from contagious diseases and sooner or later it will be you or someone you love infected with those diseases.

Take down all the yield and stop signs in your city and pretty soon it will be you or someone you love killed in an accident or unable to drive to work because all the intersections are filled with the latest pile-ups. How free will you be then?